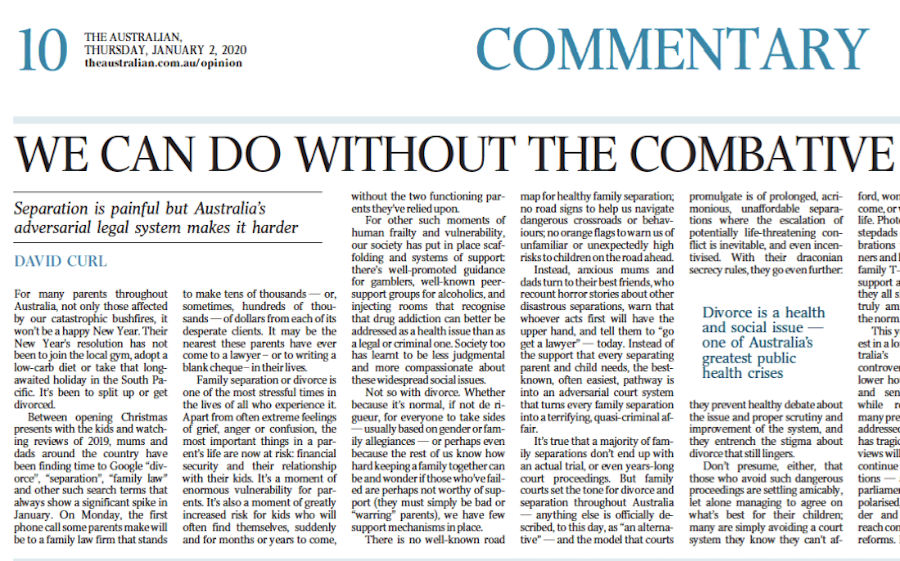 For Kids Sake outlines its vision for a fresh, health-focused
approach to family breakdown beyond 2020.

For many parents throughout Australia, not only those affected by our catastrophic bushfires, it won’t be a happy New Year. Their New Year’s Resolution has not been to join the local gym, adopt a low-carb diet or take that long-awaited holiday in the South Pacific. It’s been to split up or get divorced.

Between opening Christmas presents with the kids and watching reviews of the decade, mums and dads around the country have been finding time to google “divorce”, “separation”, “family law” and other such search terms that show a significant spike in January – prompting headlines, each year, about “Divorce Month”. Next Monday, the first phone-call that some parents make will be to a family law firm that stands to make tens of thousands – or, sometimes, hundreds of thousands – of dollars from each of its desperate, new clients. It may be the nearest these parents have ever come to a lawyer, or to writing a blank cheque, in their lives.

Family separation or divorce is one of the most stressful times in the lives of all who experience it. Apart from often-extreme feelings of grief or anger or confusion, the most important things in a parent’s life are now at risk: financial security and their relationship with their kids. It’s a moment of enormous vulnerability for parents. It’s also a moment of greatly increased risk for kids who will often find themselves, suddenly and for months or years to come, without the two functioning parents they’ve relied upon all their lives.

For other such moments of human frailty and vulnerability, our society has put in place scaffolding and systems of support: there’s well-promoted guidance for gamblers, well-known peer-support groups for alcoholics, and injecting rooms that recognise that drug addiction can better be addressed as a health issue than as a legal or criminal one. Society too has learnt to be less judgmental and more compassionate about these widespread, social issues.

Not so with divorce. Whether because it’s normal, if not de rigueur, for everyone to take sides – usually based on gender or family allegiances – or perhaps even because the rest of us know how hard keeping a family together can be and wonder if those who’ve failed are perhaps not worthy of support (they must simply be bad or “warring” parents), we have few support mechanisms in place.

There is no well-known roadmap for healthy family separation; no road-signs to help us navigate dangerous crossroads or behaviours; no orange flags to warn us of unfamiliar or unexpectedly high risks to children on the road ahead. Nor are there any expensive advertising campaigns to warn parents and bystanders alike to watch out for unattended kids at risk of drowning.

Instead, anxious mums and dads turn to their best friends who recount horror stories about other disastrous separations, warn that whoever acts first will have the upper hand, and tell them to ‘go get a lawyer’ – today. Instead of the support that every separating parent and child needs, the best-known, often easiest, pathway is into an adversarial court system that turns every family separation into a terrifying, quasi-criminal affair.

It’s true that a majority of family separations don’t end up with an actual trial, or even years’-long court proceedings. But family courts set the tone for divorce and separation throughout Australia – anything else is officially described, to this day, as “an alternative” – and the model that courts promulgate is of prolonged, acrimonious, unaffordable separations where the escalation of potentially life-threatening conflict is inevitable, and even incentivised. With their draconian secrecy rules, they go even further: they prevent healthy debate about the issue and proper scrutiny and improvement of the system, and they entrench the stigma about divorce that lingers to this day.

Don’t presume, either, that those who avoid such dangerous proceedings are settling amicably, let alone managing to agree on what’s best for their children; many are simply avoiding a court system they know they can’t afford, won’t give a favourable outcome, or will damage their kids for life. Photos of new step-mums and step-dads enjoying New Year celebrations with their former partners and kids, or wearing the same family T-shirt to a footy match to support a child whose upbringing they all share, wouldn’t go viral if truly amicable separations were the norm.

2020 brings with it the latest in a long line of reviews of Australia’s family law system, controversially co-chaired by Kevin Andrews MP and Senator Pauline Hanson, while recommendations from many previous reviews remain unaddressed. Each of these, however, has tragically failed, and other reviews will keep failing, because we continue to ask the wrong questions – and because our federal parliament is too paralysed and polarised, along entrenched gender and political faultlines, to reach consensus about even minor reforms. Like many of us, they’ve failed to recognise that divorce or separation is a health and social issue – one of Australia’s greatest public health crises, in fact. It simply doesn’t belong in a court of law.

Family separations, especially where family courts have been involved, contribute to childhood trauma in thousands of children each year, with lifelong health consequences; they’re a significant contributor to teenage mental health problems and suicidal behaviour, as well as those same consequences in adults; and they’re even linked to many of Australia’s most horrific family murders.

The solutions are not rocket-science. But they require all of us to stop taking sides. This isn’t a men’s rights issue, though all men, women and children have and deserve rights. Nor is it primarily a women’s safety issue, though we must do everything we can to keep all women, men and especially children safe from all forms of harm.

This is a public health crisis which can be addressed by investing in earlier, safer and more cost-effective measures than any family law system: measures such as well-targeted education of children, parents and society at large; earlier health interventions and support for families; clever apps and online tools that help kids and parents navigate separation and foster healthy relationships during and after separation; high-quality conciliation; and, where absolutely necessary, a process of arbitration rather than hostile court proceedings. Measures that give families a chance of re-inventing themselves, rather than a guarantee of their destruction.

Together, these and other measures drawn from examples of world’s best practices, can create the fresh approach to family separation that our children and families so desperately need and deserve. Wouldn’t putting that in place before the end of another decade be a great resolution to make for the New Year?